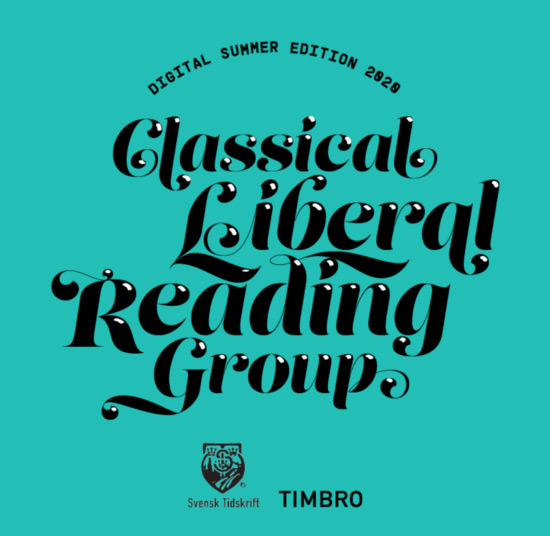 This summer, Svensk Tidskrift joins Timbro in offering an on line reading group on Christianity and Liberalism, discussing Larry Siedentop’s Inventing the Individual: The Origins of Western Liberalism. The group will be lead by acclaimed ecconomist Daniel B Klein, and registration is now open.

In his book Inventing the Individual: The Origins of Western Liberalism (2014, paperback 2017), Larry Siedentop argues that modern Western liberalism is the child of Christianity. That is, the Christian understandings and intuitions that evolved overtime were a necessary condition to the liberalism that emerged in the 1600s and 1700s.

The story covers the ancient world up to the Renaissance. Siedentop says that by the time of the Renaissance Christianity’s intuitions had been well formed and well established, opening the way for liberal developments. Even when it turned against the clerics, Western civilization was swimming in Christian ways of understanding.

If the Christianity of Paul, St. Augustine, and others eventually gave birth to liberalism, why did it take 1000+ years? Siedentop narrates those 1000+ years. A single step in the process could take centuries. So much had to change. From the point of view of the ancient world, the ethic of universality and the emphasis on the individual would be a great revolution.

Siedentop highlights the following themes in Christianity: The personal relationship with God, moral equality before God, universality and universal benevolence, the conscience and its potential independence from any single social influence, the human being as essentially an individual soul, the invention of the individual, the centrality of the will, choice as an integral element of religious conviction, the distinction between the spiritual or divine realm and the practices and institutions of the temporal realm, jural integration and sovereignty, the individual as the unit of subjection, the rights of the individual, the duty of government to respect those rights.

Siedentop’s work is an opportunity for classical liberals to gain a better appreciation of their debt to Christianity. It took a long time, but Christianity provided the underpinnings for the formulation and projection of personal liberty and free enterprise economics.

Siedentop’s work is also an opportunity for Christians to come to appreciate that the idea of liberal political order emerged along the lines of Christian ethics of justice and equal moral standing.

When Adam Smith speaks of market forces being led by an invisible hand, it is not unreasonable to think that he means the hand of the Christian God.

This project should help to fend off the common misrepresentation of liberalism as a selfish or atomistic philosophy. Liberal attitudes find their justification in serving the greater good, or universal benevolence, meaning service to a benevolent universal beholder — as in Christianity.

Building on the work of Brian Tierney, Siedentop brings light to the elaboration of individual rights in the 12th, 13th, and 14th centuries, long before John Locke.

Siedentop brings light to how the development of an integrated legal system within the church inspired the idea of a rule of law in the political domain, with the individual as the unit of subjection. Subjection can be oppressive, but Christian ideas about the sanctity and equal dignity of individuals meant the articulation of individual rights.

All the seminars will be held online. Links and further instructions for following the sessions will be distributed to those who register.

The 27 chapters of Siedentop’s book will be treated in five sessions. In each session, the format will be:

Much of the session, then, will be Klein summarizing the Siedentop material (as opposed to just open discussion).

Below are provided links to videos about religion and church history, videos created by Ryan Reeves.

The reading group is open to all. Contact Björn Hasselgren if you have any questions about the Reading Group Online Summer Edition, bjorn.hasselgren@timbro.se, +46-70-7623316. If you are interested in participating and want to obtain the books, write an email to Björn and describe your background and tell him why you would like to take part of the exercise. Apply by June 5.

Professor Daniel B. Klein is also available by email dklein@gmu.ed

Amanda Wollstad is the Editor in Cheif of Svensk Tidskrift

FMRS Stockholm: Pro-Business instead of Pro-Market? Flockmentalitet är ordet
We use cookies to ensure that we give you the best experience on our website. If you continue to use this site we will assume that you are happy with it.Ok