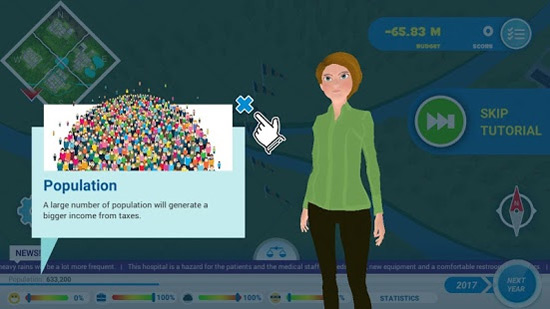 The EU often faces undeserved criticism, but on occasionally the union makes it all too easy for their critics. Like when the Commission takes it on themselves to educate Europe’s younger citizens in taxation, and the lesson is that bigger is always better. Christofer Fjellner is not equally convinced.

The EU often faces undeserved criticism. Broad accusations that either this or that is vaguely “the EU’s fault”. You seldom hear someone in national politics stating that it is the “parliament’s fault”. In the national case, accusations are much more precise. It is “the Social democrats” or the “minister of finance” who has made a mistake. But when the European Commission introduces an interactive online game about increasing taxes in the Member States, well, then the Commission actually deserves to be criticized. In the recently launched game, you are the prime minister of the small fictive state “Taxlandia” and your task is clear: to recover an economy in crisis and strengthen your country’s competitiveness. And how is that done? By raising taxes and increase public spending, of course. At least that is obvious to the Commission. The purpose of the game may be a good one – to educate youngsters on the delicate matter of taxes – but it is for sure not a task of the Commission to advocate for higher taxes and more public spending.

Agencies and publicly funded organisations should not spend their time and money on lobbying. It is hardly the task of the Commission to lobby for a left wing economic policy in Member States. Especially not when you consider the fact that the game Taxlandia is part of a wider project “Taxedu – that is tax and education – directed towards kids and teenagers and designed to be used by teachers in classrooms. The Commission is however not alone to misinterpret its mandate and role in society. It is a bad habit that has spread to many more agencies and publicly funded organisations. Not least in my own country, Sweden. Here the Commission would be in great company.

It is, however, a good thing that citizens have knowledge of, and insight into, how fiscal systems are designed, how much they pay in tax and what they get in return. It is often impenetrable material with a jumble of taxes, VATs, payroll taxes and social fees. I am quite sure most Swedes do not know that a person who makes roughly 3000 euros/month – the average salary – pays 53 percent in different taxes. But to objectively inform on fiscal systems is quite different than to advocate for a certain tax scheme.

It gets even more problematic when the lobbying of the Commission is also factually wrong. A country hardly gets out of its economic trouble and strengthens its competitiveness by increasing taxes. The Euro crisis, which I assume the Commission is fairly familiar with, is an excellent example. The crisis was not handled best by countries that pursued economically expansive policies but rather by countries that made painful but necessary cutbacks and structural reforms. Those countries were first to be on the right track again.

Last but not least, it is good to be reminded that fiscal policy is and should be a Member State competence. In the wake of Britain’s decision to the leave the EU a vivid debate over Europe’s future and what kind of EU we want to have has started. In that discussion the issue of giving the EU power of taxation has gained momentum. There are fundamental reasons as to why the power of taxation should be tied to Member States also in the future. However, the fact that Member States have to agree unanimously on the EU fee is also important. Those who favour a European Union with the power of taxation want to circumvent national governments and parliaments. It is government and parliament officials who have to face citizens and explain the value of the fees Member States pay to the common EU budget. That the Commission in the midst of the ongoing debate launches a game, which focuses on increasing both taxes and public spending is strange to put it mildly. If the Commission really considers as one of its core tasks to develop websites and games, then at least they should cover topics that the EU does decide upon.

Let me be very clear, no taxes should be increased in Taxlandia or any other country for that matter. The Commission should not encourage higher taxes and definitively not even suggest that doing so does any good for competitiveness in Europe. No, rather than developing games, the Commission should go all in in trying to solve the real challenges and problems that the EU faces. As most people are well aware, they are not few. We need structural reforms that strengthen competitiveness and lay the foundation for growth and jobs. We need to develop the common market and the four freedoms associated with it: goods, services, people and capital. We need to tackle the refugee crisis, stand up against an even more aggressive Russia and protect ourselves from more terrorist attacks on European soil.

En seg hundraåring Våldsamt intressant om läktarkultur
We use cookies to ensure that we give you the best experience on our website. If you continue to use this site we will assume that you are happy with it.Ok