FMRS: Reality is the best friend of the free market

This Monday Free Market Road Show visited Stockholm, where friends of liberty discussed how to tackle the threats against capitalism and free trade. Kalle Bäck reports from the event.

FMRS brings together business people, scholars and students, opinion leaders, policy experts, elected officials, diplomats and other interested parties from across Europe to discuss openly core European values. FMRS is arranged by The Austrian Economics Center (AEC), in cooperation with over 100 leading think-tanks and universities across Europe and in association with international partners. On Monday FMRS visited Stockholm and lokal host Svensk Tidskrift.

The first theme of the day was ”Values that are important for the free market”, discussed Gunnar Hökmark, MEP for the moderate party EPP, Richard Zundtrisch, Austrian Economics Center and Anna-Lea Bohm, CEO, Uniguide AB and chairman BusinessEurope Entreprneurship and SME Comittee.

Gunnar Hökmark quoted Swedish former prime minister Olof Palme, who said that ”reality is our worst enemy”, which is true when it comes to socialism – an ideology which has created nothing but poverty and political opression. For free market-supporters reality is our best friend. The free economic system has created wealth for billions of people and keep doing that every day. Beside economic and political freedom the free market also stimulates a vital cultural life and civil society. This is what happens when human beings are treated like individuals and is given to the power to choose path in life.

Some very important values for the free market is about to be lost, Richard Zundritsch noted. The central banks has created a low interest rates which makes the price of money is too low – and prices on for example housing higher. This is a way of stealing from the next generation and it makes poor peoples savings less worth. Policymakers must think in another way.

Entrepreneurship and innovations are necessary to achieve economic development. Values for entrepreneurship must therefore be defended, Anna Lena Bohman said. The government must make minimal interventions in the free market. At the same time it is very important that the authorities guarantee the rule of law and protect copyright for example. We must have functioning institutions, but the legal framework and regulation must be modernised when technology makes new things possible.

The panel seemed to agree that it is more important than ever to defend the values that the free markets is based, on such as property rights, rule of law and individual freedom. 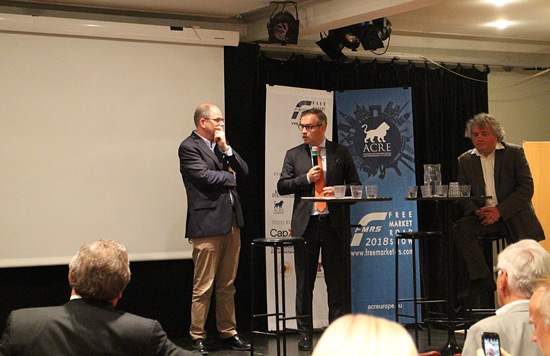 The second panel focused on Sweden as a small, open ecenomy in a new protectionist world order. The panel consisted of Jens Hedström, Head of Brussels Office of the Confederation of Swedish Enterprise, PJ Anders Linder, CEO Axess Fundation and Richard Teather, economist.

Jens Hedström higlighted the importance of free trade, which he described as a part of the Swedish DNA. As a small and open economy Sweden is dependent on export and economic interaction with other countries. 1,4 million Swedes are dependent on foreign trade for their living.

Richard Theather made clear that Sweden and Estonia are interesting examples when it comes to taxation. Sweden is the bad example, with all its high and unlogical taxes, and Estonia the good one with its simple system and flat tax. But due to modern research Sweden’s economy is in very good shape and has good climate for entrepreneurship. This is possible because Sweden is an open economy with a strong tradition of free trade. But, he pointed out, the country could have been even better off with lower taxes.

The subject of FMRS 2018 was very well choosen, PJ Anders Linder pointed out. Many political forces and regimes all around the world are threatening political liberalism. But the free market and capitalism are in better shape than ever. Fighting poverty has been very successful over the last decades – thanks to the free market. Politicians and entrepreneurs must now talk more about the importance of the free market as a guarantee for welfare. This must, however, be done in a respectful way and decisionmakers must take peoples worries for the future seriously. That is the only way protectionism and threats to the free economy can be fought.

Svensk Tidskrift like to thank all of the participants in FMRS 2018 for a fruitful seminar. Friends of free market must defend the important values which it is based on. We can´t take anything for granted, and the debate must continue.

Misstag i älskogen Replik: Fromma GDPR-förhoppningar
We use cookies to ensure that we give you the best experience on our website. If you continue to use this site we will assume that you are happy with it.Ok