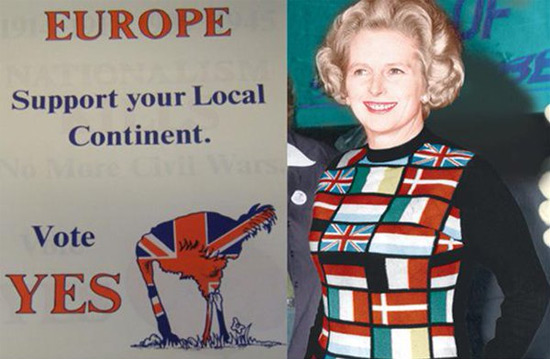 This week we celebrate the 30th anniversary of Margaret Thatcher’s famous ‘Bruges Speech’, where she put forward her vision for the future of the Europe. In the new study ”30 years after Bruges: Margaret Thatcher’s Vision for Europe Revisited”, Kai Weiss have looked at what we can still learn from the former British Prime Minister.

Europe is today in the midst of a debate on the future of the European Union. It is not the first one: back before the Maastricht Treaty was passed in 1992, political leaders were discussing as well about where the EU, or as it was called back then, the European Community, was heading. Should it go the way of the “ever closer union,” or revert back to the fundamental principles? There was a split going through Europe on questions like this.

This was the situation in which the British Prime Minister Margaret Thatcher found herself on September 20, 1988, when she stepped in front of a crowd at the College of Europe in Bruges. “I decided that the time had come to strike out against what I saw the erosion of democracy by centralization and bureaucracy, and to set out an alternative view of Europe’s future,” she would later write in her memoirs The Downing Street Years.

The result was today’s infamous yet magnificent ‘Bruges speech,’ which was far from being anti-EU, but a stark warning against Brussels, an attempt to save the EU in the wake of federalists demanding more and more integration. This week, we are celebrating the thirtieth anniversary of this speech. And, as it turns out, it has stood the test of time shockingly well. Indeed, many of the warnings that Thatcher put forth are even truer today

In Thatcher’s vision, the European heritage is of crucial importance. She tries to teach us that Europe can be proud of its history. While wars did play too big of a role in the past, Europe is still the continent in which the ideal of individual liberty prevailed before anywhere else. It is the continent which brought forth many of the greatest innovations, artistic pieces, literary works, and intellectuals the world has ever seen.

Great Britain has played an instrumental part in the European story, Thatcher makes clear: “Our links to the rest of Europe, the continent of Europe, have been the dominant factor in our history.” Britain has contributed mightily to European history and its values with the Magna Carta, the Glorious Revolution, and many other major steps on the path to freedom. But so has Britain benefitted from its link to mainland Europe, for instance having “borrowed that concept of the rule of law which marks out a civilized society from barbarism.”

This special relationship, says Thatcher, must be retained. Today this is even truer: on the eve of Brexit, it is of the utmost importance to keep this mutual understanding between the two sides intact, regardless of whether Britain is in- or outside of the EU.

Despite the millennia-long European history of (much) success, we need to remember that it is the long history of Europe, not the EU (the latter being only sixty years old): “Europe is not the creation of the Treaty of Rome. Nor is the European idea the property of any group or institution.” Not everyone who criticizes the EU is automatically anti-European – an important point in today’s world in which Europe and the EU are most of the time used synonymously.

Rather, the European Union is a tool which can be used to promote the values Europeans defended so often in the twentieth century: the EU “is not an end in itself,” but rather “a practical means by which Europe can ensure the future prosperity and security of its people.”

What is the way to future prosperity? For Thatcher, it is “to deregulate and remove the constraints on trade.” It means “action to free markets, action to widen choice, action to reduce government intervention.” Instead of increasing centralization and regulatory efforts, Europe should remain a champion of free enterprise. History – and the Soviet Union, should be enough proof that centralized decision-making doesn’t work.

The EU should not only be pro-trade to the inside, however. Instead, it should be globally oriented: “Europe never would have prospered and never will prosper as a narrow-minded, inward-looking club,” she warned. Free trade with the outside world – something that the EU is lacking behind to this day (while forcing all member states to comply with its trade policy), is one of the most important competences of Brussels: “we must ensure that our approach to world trade is consistent with the liberalisation we preach at home.”

For this, a strong relationship with America is needed. For Margaret Thatcher, the U.S. was indeed to a certain extent part of Europe, “in the sense that she shares a common heritage of civilised values and a love of liberty.” It is a natural fit between the two sides of the Atlantic, since the core values are shared with one another. In the face of today’s trade wars and aggressions on both sides, it would be all the worse if this relationship would be squandered in just a few months’ time.

If there is any argument which the Prime Minister hit home continuously, it was her stark opposition to a centralized federal state, ruled by the Brussels bureaucracy. The idea of a United States of Europe is a utopia that “never comes, because we know we should not like it if it did.” Instead of politicians trying to create a single European identity, the mantra should be unity in diversity: “Europe will be stronger precisely because it has France as France, Spain as Spain, Britain as Britain, each with its own customs, traditions and identity. It would be folly to try to fit them into some sort of identikit European personality.”

In Margaret Thatcher’s opinion, the EU should stay a supranational organization which is based on voluntary cooperation between sovereign states, rather than one federal state. She perhaps felt alone with this opinion when she presented it thirty years ago. But today, with another debate on the future of the European Union – and even farther down the road of the “ever closer union,” we should keep in mind what Lady Thatcher said, and “to raise the flag of national sovereignty, free trade and free enterprise – and fight.” Indeed, as the Prime Minister wrote in her memoirs, “if there was ever an idea whose time had come and gone it was surely that of the artificial mega-state.”

Kai Weiss is a Research Fellow at the Austrian Economics Center.

”30 years after Bruges: Margaret Thatcher’s Vision for Europe Revisited” can be downloaded here.

Kolet var inte Vattenfalls fel Enpartistatens era
We use cookies to ensure that we give you the best experience on our website. If you continue to use this site we will assume that you are happy with it.Ok